Leading up to my first mental breakdown, I was a Service Manager for a local Authority in London, working with young adults with severe physical disabilities.  Prior to this, I spent a number of years as Deputy Manager in a Drug Rehabilitation Unit.

Materialistically, life was successful and comfortable, but there had been a lot of trauma in previous years.  This is not only relating to childhood abuse.  I had also gone through a traumatic experience in the 1990’s, which was now launching into a (delayed) Post Traumatic Stress response.

There is not a lot I can say about this situation, as it will blow my anonymity.  What I can say is that it is a very well-known violent crime in the UK.  I was one of the victims and our assailant is now serving life imprisonment.  One day I will write a password-protected post, but I need to construct the background for now.

My memory of summer 2000 is sporadic and blurry.  I had already given my employers notice to leave and was struggling to hold it together.

Driving home from that final day at work, it felt like I was tripping on psychedelic drugs.  The sun was brighter than normal and every sound was accentuated and echoing.  I wanted to scream.

I live alone, but on arriving home, I run straight to the bathroom and lock the door.  Life

was on meltdown.  I recall crouching in the corner, head between the knees with hands tightly clasped over my ears.  I am detached from the continual moaning sound coming from my throat.

One minute it is a hot sunny day, with children noisily playing outside, the next it is dark and quiet, other than the busy London traffic.  There is no sense of time; I had lost contact with reality.

My next awareness is being sprawled across the living room floor, empty alcohol bottles and some pills strewn everywhere.  There is an unsettling noise – banging, the sound of breaking glass, and men’s voices nearby.  I immediately know someone is climbing in through the bathroom window.

As I stand up, there is a police officer and paramedic standing inside the doorway.  Friends had alerted them after an eight-day absence.  The Emergency services had broken entry and witnessed the true state of my mind.

Later that same day, there is a vague recollection of debating with hospital staff over

whether to stay or go.  By late afternoon, I am on a two-hour walk home under the hot summer sun.  It did not occur to ask for help.  The next recollection would turn out to be the weirdest experience of my life.

I was sitting at home, on the PC in the living room.  My sister is visiting.  She is sitting on the sofa, crying, uncontrollably.  Our parents have upset her and I am furious.

There is no memory of dialling their number, but Dad is on the phone.  He is unusually calm, given the circumstances.  I’m so busy ranting and demanding to speak to Mother, at first I don’t register what he’s saying.  Over the next few seconds, his words gradually begin to seep into my consciousness.

“Listen to me, Cat, your sister’s not in London, she’s here in Scotland”

“Your sister is NOT in London, we have just seen her an hour ago.  She IS here, 500 miles away, in Scotland”

Something in Dad’s voice snaps me out of it.  In the blink of an eye, my sister vanishes.  An empty sofa stares straight back – a gaping hole I wished would swallow me up.

Dad does not utter a word, as though he instinctively knows I have lost the plot.

“Depression secondary to Post Traumatic Stress Disorder” He states in a matter of fact manner.

I stare in disbelief.  Had he heard everything I just told him?  His ambivalence seemed to invalidate the desperation of my experiences.  This was a huge-mind-blowing event in my life.  For Dr Potty, it was just another day at the office… 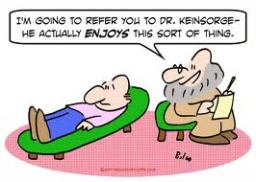 27 thoughts on “A Mental Breakdown”