We all do it, some more than others, but few are comfortable discussing “it.” There

must be near one hundred words to describe our embarrassment – We ‘poo’, ‘dump’, ‘shit, and even go for a ‘hell’s candy,’ there’s a ‘cow’s fart’, a ‘number two’ or an ‘Easter bunny present’. Here in the UK, the stiff-upper-lip Brits like to say, ‘sit on the throne’, plus many more here.

When things start to go wrong ‘down below’, it can feel a real pain in the ass, quite literally. If you’ve experienced sexual abuse as a child and then need a health professional to poke around the rear end, even years later, the trauma revisited on your adult mind can be baffling and devastating.

It all started six to eight months ago when I embarked on a reduction of a mental health medication, called Quetiapine (Seroquel). I’ve been on this drug for around three years and realised very early on that there are issue’s with weight gain. I had never experienced any problem maintaining an ideal weight of 154lbs, but I steadily ballooned to 203lbs and the inevitable clothes-bursting expansion.

Two of the side effects from reducing this medication are weight loss and possible issues with inflammatory bowel. Of course, prone to the “spurts,” my bowel went straight into meltdown, but the drop in weight made up for all the mornings sitting “on the throne” for longer than Her Majesty the Queen.

When I eventually went to my family Doctor nine-days ago with a sore rump from all the “Easter bunny presents,” rather than praise the loss of 49lbs in 6-8mths, he said, “You need to attend the hospital for further tests.”

I was gobsmacked, “But, I only wanted some haemorrhoid suppositories.”

I duly attended hospital yesterday, eager to convince the Senior Consultant of the Doctor’s error. When his finger was inserted where the sun doesn’t shine, I mentioned the Quetiapine for the third time, but the Consultant dismissed the theory and said, “But, Mr Cat, you’ve lost too much weight.”

“Really?” I said, “That is not what I read on the internet…OUCH.” Okay, questioning a

senior Consultant, with his finger up while in the foetus position, might not be a bright idea, and my finger indentations on the examination table will bear witness to this moment for years to come.

When I arrived home yesterday, I felt completely drained and utterly depressed. Naturally, I was worrying over their concerns, but this was more about having to lie in the position to have things done to me that are similar to the childhood memories.  The sensations were a stark reminder of the violation. 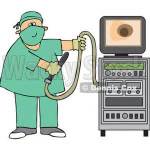 My dilemma is that I don’t know how I will be able to undergo a colonoscopy. Sedation is not an option due to the drive home afterwards, but even if it were possible, the dosage would never be enough to support me through this.

Rather than tell the Consultant why this might be a problem, I dissociated.  How can anyone just come out and say abuse?

I wonder if any of you have gone through similar and how you managed to cope with such a seriously triggering event.