If anyone has undergone a colonoscopy, you will know the laxatives to prepare the 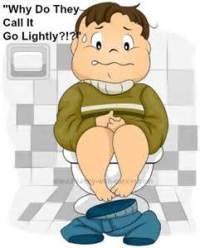 colon are ass-splitting-powerful. Unfortunately, the magic potion also made me dreadfully ill and I didn’t go to the toilet for over ten hours, but I’ll spare you the gory details of that triumphant dawn chorus.

I was so nervous on arrival at hospital, the dissociation kicked in and I barely uttered a word to the nurses on the ward, which is unlike my usual chattiness. One of them said I looked very relaxed, but I was really trembling. It brought home how I can have this stoic appearance when in reality, there is a storm blowing underneath.

There was more than an emotional storm blowing underneath because those laxatives caused enough flatulence to power a wind turbine generator.

Everyone is familiar with the infamous hospital gowns and the humiliating opening down the back. My wicked sense of humour thinks it’s hilarious whenever someone

doesn’t realise and then parades up and down flashing their rear end.

While I waited on the hospital bed for the dreaded procedure, I had to get up several times for the loo. Fortunately, I didn’t need to worry if my gown happened to flap open at the back, the nurse had provided me with a pair of disposable shorts to spare my dignity, or so I thought.

What I hadn’t realised is that these shorts are specially designed for the colonoscopy procedure and they too have a cheeky split up the back. It seems the butt end of the joke was on me that morning.

Going to theatre was the worst moment. It felt like they were wheeling me along the corridor of death and my bum was already screaming in terror.

Once we arrived inside the small theatre, my eyes went in search for the colonoscopy

torture instrument. Why did I do that? I have seen thinner cables to power electric trains, but it was a bit too late to change my mind and I could only hope the anaesthetic would be enough.

The Anaesthetist looked a little surprised when the intravenous Midazolam appeared to have little effect, although I certainly found my chatter again. I said, “When you’re up there, Doctor, see if you can find my dignity.”

When they finally injected the Propofol, I was instantly disappointed not to feel the wonderful effects, “It doesn’t appear to be working,” I said.  That was the last thing I remember until I was back on the ward. 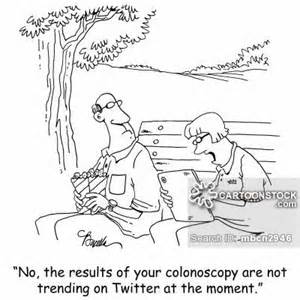 I am upbeat about the results, although I don’t yet know the full picture. If there were anything to cause weight loss, surely they would have seen something there and then. They did remove six polyps and some kind of procedural biopsy. I do have Diverticular disease, which is common in our western diet. The lab tests take up to eight weeks, but I’m sure they will respond sooner if there is anything untoward.

I really don’t know what to think about the weight loss. I stopped reducing the MH meds four weeks ago, so technically the weight should start to stabilise. If it continues to drop over this weekend, I can go back to the family Doctor, or otherwise wait for the results and take it from there. Altogether, I am not concerned. For now, I just need to get my therapy head back on.

41 thoughts on “The dreaded Colonoscopy”