This might be the one of the worst subjects for me to open up for discussion and some might view my opinions as a little controversial or maybe even cruel and unsympathetic. I would be interested to hear what other people think, even if it is to help me see the error of my ways.

There were times in the past when I was just as suicidal as the next person who suffers from a mental health condition. I imagine most of us have experienced this kind of dark ideation. I do get that.

I seldom say that I feel suicidal, although I may well have used that terminology as a means of expressing the sheer hopelessness of depression.

I remember once admitting to a Psychiatrist that I was a suicide risk, but my intentions were purely to seek the appropriate help I needed at that time.

I understand and admire all the reasons why someone would be brave enough to admit their suicide ideation.

What doesn’t sit well with me is when a person chooses to elaborate on the ins and outs of their half-hearted attempts at suicide without any apparent purpose to their testimony, other than to express how bad they’re feeling.

Maybe I should feel more sympathy, but I just can’t identify with this need.

We are all partial to various degrees of self-pity but there are other ways to indulge, rather than talk for an hour about an insipid set of events, which supposedly portray a serious suicide risk.

I don’t want to listen to stories about climbing to the top of a tall building, only to remember that vertigo stands in the way of jumping off the edge.

I would rather not know about someone buying two bags of heroin to swallow with the very last £20 state benefit money, even though she is currently on a medication that cancels out the effects of the drug.

While I do know how it feels to sit at home isolated and unable to answer the phone, I do question why anyone would then take a call from a relative, just as she begins to feel ill from taking an apparent overdose.

“Sorry, auntie, I can’t talk because I am just about to die,” is hardly the voice of someone wishing suicide.

I have watched people in seizure and as far as I am aware, they usually experience amnesia before and after the event. I am sceptical if someone describes a convulsion in detail.

When I have listened to someone’s wishy-washy endeavours to die for an hour, my patience runs out.

I am not a mental health worker. I have no responsibility for anyone who is on a ‘woe is me’ trip and neither do I need to take it seriously… I just wonder if I should, morally.

Maybe I should have more empathy. Maybe I should feel more concerned for someone’s state of mind and safety. Maybe I should, but I don’t. The only emotion I feel is anger, which feels confusing to someone who usually possesses bundles of compassion.

I tried last night to think about any experiences from the past that might contribute to my lack of empathy for this kind of scenario. I don’t know if this is it, but I had a flashback to my mother’s depression.

Mum was a very moody and temperamental character and we all know how everyone in close vicinity suffered the brunt. I remember her speeches of martyrdom and even though dad provided a comfortable life, she was always having such a terrible time. Her suicidal depression was my fault.

They say psychotherapy unlocks memories buried deep within our subconscious and perhaps this is the root of my agitation. Nevertheless, the realisation does not help me feel any more compassion.

I would love to know how you deal with other people’s suicide ideation.

excessive ruminating. Initial attempts were reasonably successful for three short weeks, until last Friday when I started to ruminate my way down a slippery slope. Yes, I slipped on my weary ass and it feels like a humiliating defeat.

By the time I arrived at Paul’s therapy room on Thursday, I was sick to the back teeth of hearing my own voice banging on day and night about the same dysfunctional family dynamics. It’s ridiculous how I go to great lengths to keep certain people at a distance, while allowing them to live within a daily stream of endless rumination. What is the point?

I do believe rumination can be a worthwhile part of the healing process, but I need to make space in therapy for analysing my own shit within. The first problem to raise its ugly head is my fiercest enemy, anger.

Even though I need to speak my mind, it’s seldom in anger. This is less to do with being a cool and controlled Cat, and more about feeling terrified of my own anger and the other person’s response.

Something deep within says that anger is bad and I am bad for feeling or expressing it. Anger might provoke a furious response, or antagonise the threat of aggression and violence. Anger is wrong and can only end in rejection. This is ridiculous, I know, but those are the early ingrained messages. It’s easy to see how depression is anger turned inwards.

When I was in confrontation mode with Dr C at last week’s group therapy, every part of my body trembled while my voice quivered through our tense interaction. I wasn’t necessarily fearful of her response or worried that my anger might spiral out of control, but this tiny winy bit of agitation I had towards Dr C, felt like the last straw to a mountain of anger I’ve supressed over the years.

Anger has always been an extremely self-destructive emotion. Years ago, I would go off on drug and alcohol binges, each one conceived in anger. My reckless lifestyle would titter on the edge of danger until my health finally gave way.

In hindsight, it’s easy to see how that behaviour was less about addiction and more to do with self-destruction. Nevertheless, the anger didn’t go anywhere, but instead it evolved into chronic depression.

dreaded rumination and I really do need a break.

If we receive punishment and rejection for feeling angry as children, there is little opportunity to learn how to express this emotion as adults. If those early messages say we are bad, ungrateful and selfish for feeling anger, it’s hardly surprising that we systematically turn our rage inwards.

months ago. I’ve tried to engage with the coldness several times, but it’s difficult to connect with a Therapist who appears distant and downright friggin rude at times.

If I’m trying to interact with someone, but there’s a distance in the dynamics, the experience can transport me back to childhood where I regress within that same sense of exclusion I felt as a child. This has taken me years to understand and I want to stand up against it rather than sink into one of those detached silent episodes.

I already talked about this in the group last week, including how I feel about this odd character, Dr C, but it evidently made little difference. Just because she triggers something from my narcissistic upbringing, doesn’t mean to say she’s not being a snotty cow.

Yes, Cat was sharpening his claws on Friday and that little bit of agitation can feel like the last straw to a mountain of supressed anger from the past. My focus was on Dr C, but she was still looking downwards, even after I started to speak.

Me: “When we enter this therapy room on a Friday, our Therapist, Frankie, welcomes everyone with a smile while you, Dr C, sit there with your head almost between your knees, I often wonder if you’re actually sucking your toes down there.” I have her attention now.

Frankie: Her small stature shifts uncomfortably in the seat. “Yes, but remember we talked about what this represents for you, Cat… the distance, your parents…and how that causes you to retreat.”

Dr C: Mumbles beneath a large hand, now covering half her face, only the eyes are visible and she’s beginning to creep me out. Her English is perfect, but it sounds like she has a sweaty sock stuffed in her mouth. “Yez, go von,” she says in a very neutral-I-don’t-care-tone, which only riles me further.

Me: “The distance I sometimes feel in this room may well remind me of my parents, but your face is still on the floor and it’s rude. I try to feel some sort of connection, but I only seem to hit a frosty front and it’s difficult to find trust in there.”

Dr C: Says nothing, her eyes in a Therapist squint, searching for a deeper meaning within me, but I am adamant that she needs to own part of this.

A couple of other group members shared similar experiences, so it was a relief to realise this is not just my perception. While they talked, I was fighting to compose the misplaced anger.

Me: “When I shared during check-in this morning, you didn’t look at me once, it’s not the first time, and I feel you must have some sort of problem with me…”

I wasn’t looking for their feedback, just as well because I didn’t get any. Nothing could change what I said… actions speak louder than words. Dr C was a little vague, “Maybe you have a point.”

I assumed she meant I had a point about her being a snotty cow, but later that night I 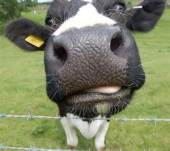 wondered if she was actually saying, “You’re right, I have a problem with you.”

The most important thing for me is that I was honest and my self-esteem is no longer at risk of suffocating in silence. Who cares what the snotty cow thinks.